The Isian Centre of Metaphysics offers an assortment of exciting and informative half and full day workshops that focus on myth, metaphysics and the mystical.  To be notified of what workshops and when they are available, follow out blog or join us on Facebook. 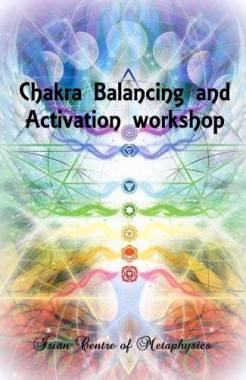 Chakra Balancing and Activation
Chakra comes from the ancient Sanskrit word being “wheel” and according to such teachings, there are seven major chakras (or energy centres) that are located along our spinal column.  We also have many more smaller chakras located all over our body.  The chakras monitor the energy (“prana”, “chi” or “ka”) that pulses through our bodies.

When our chakras are open and functioning correctly, we feel vitalised and full of energy.  However they can come blocked due to negative emotions, doubts, stresses, addictions and illness, resulting in us feeling lethargic, unhappy and even “out of sorts”.

The use of Attraction Dolls (also referred to as “poppets”) date back to ancient Babylonia, Egypt, Greece and Rome.  From binding deities for defensive purposes (as the instance of the Greece “Kolossoi”) to the Hollywood inspired “Voodoo” dolls, poppets are basically effigies (images) of a person made from paper, clay, fabric, steel, corn husks or any other suitable material.

In this workshop we will be crafting our own Attraction Doll for whatever purpose you desire – be it for health and healing, protection, study, to gain employment, fertility, establishing positive relationships, or even the removal of negative influences.

The Power of Crystals
The potency of crystals has been known since ancient times and today, they are not only worn to adorn, but also to heal, to protect, to divine, to manifest and to transform energy.  Each crystal has a chemical composition, myriad forms and colours.  They heal us on all our levels – the physica, emotional, mental, and spiritual.

Crystals are used for healing, protection, chakra opening and cleansing, physical and emotional wellbeing and enhanced psychic awareness.  In this workshop learn how to harness the power and energy of crystals in order to revitalise your life in many ways.

Other workshops available include:

** Introduction to Wicca and Modern Paganism (providing an overview of modern Pagan practices)
** The Wheel of the Year (exploring the folklore and working with the eight seasonal festivals that mark the gateways and midpoints of each season)
** Climbing the Tree of Life (an introduction to the Mystical Qabalah)
** Maiden,  Mother and Wise One (a discovery into the three phases of being a woman)
** Brighid’s Sacred Fires of Healing and Transformation (working with the Celtic Goddess (and later saint) Brighid in order to heal and transform our lives)
** The Land between Two Rivers (exploring a selection of Gods and Goddesses from ancient Mesopotamia)
**  The Land of the Pharaohs (exploring a selection of Gods and Goddesses from Egyptian mythology)
** Ladies of Avalon and King Arthur’s Court (an exploration of the ninefold sisterhood that appears within the stories that make up the Arthurian legend)
** Call of the Wild God (the Pagan God of the forests and wild places)
** Esoteric Numerology (an eight part course working through numbers that appear in one’s birth date as well as the equivalent of birth and other names)
** Journey of the Soul (focusing on the metaphysical belief of the evolution of the soul and what this means in the modern world)
** Sacred Journeying (exploring techniques of realising and developing one’s innate psychic abilities)
** Exploring Totem Animals (a journey through the four animal kingdoms in order to discover your own personal totem animals and animal guides)
** Mystical Matters (exploring age-old techniques that the mystics and shamans of old used with respect to aiding and improving the lives of those around them)
** Entering the Dreamscape (exploring the secret meanings of dreams).