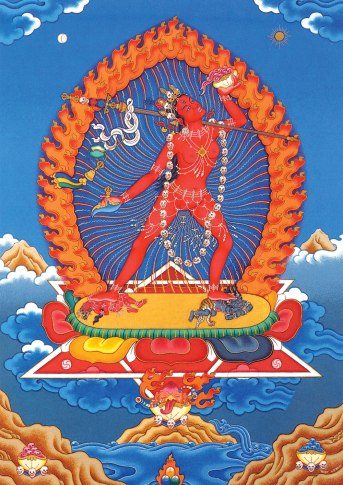 Vajrayoginī is the wild spirit found within Buddhism.  Being a tantric deity and dakini (“sky dancer”), she is the one who dances ecstatically in the clear blue sky of śūnyata (the void).

Also known as “Wrathful Lady”, Vajrayoginī is usually depicted blood red in colour, standing naked except for elaborate ornaments of human bone, and a necklace of skulls, corresponding to the sixteen vowels and 34 consonants of the Sanskrit alphabet,  each symbolising the purification of speech. In her right hand she holds a flaying knife with a vajra (crescent-shaped) handle that she uses to cut off attachments.  In her left hand is a skull cup filled with mahāsukha (the great bliss) which she pours out like wine to her devotees. In the crook of her left arm she cradles a magical staff known as a khatvanga.

When looking at the iconography of Vajrayoginī, one cannot help but notice the similarities to the Hindu deity, Kali.  This may be because Vajrayoginī’s sadhana (religious practice) is thought to have originated in India between the 10th and 12th centuries.

Kali is called Troma Nagmo in Tibetan which means “Black Ferocious Mother”. This is an absolutely key practice in the Nyingma and Dzogchen traditions of Indo-Tibetan Buddhism.  While not black in colour, Vajrayoginī is also known as the “Fierce Black One”.  This is because within Vajrayana traditions of Buddhist tantra, both Kali and Vajrayoginī are All Accomplishing devis.  This is because they manifest in different colours to perform the different mandala activities, such as:
– White for Pacifying and Purifying
– Golden for Enriching and Providing
– Red for Magnetizing, Harmonizing and Subjugating
– Black for Cutting through negativity and obstacles.

Throughout March, Vajrayoginī will be the focus of Monday Night Meditations.  During these meditation circles, we will be chanting the short version of Vajrayoginī’s mantra:

The following is an excerpt from the poem The Trauma Goddess:

I am the diamond maiden, the player of games
The yogini is one of my forms
Showing that I am beyond earthly attachment
I am the shining revelation to the ascetic
The women in silk and roses
I am the harlot in black net and leather,
who gives enjoyable punishment
I am the glass bead master,
creating universes of form
And a spark of me is in each bead,
for I dwell in karma.

Monday Night Meditations is an open circle that takes place at the Isian Centre most Monday evenings (except for public holidays).  Beginners as well as the more experienced meditators are more than welcome to attend.