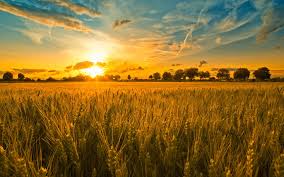 As the Wheel of the Year turns once more, those of us residing south of the equator find ourselves at the gateway to the Autumn months and the darker months of the year.  Ironically, however, this gateway tends to herald in the hottest weather as if the sun is determined to cleanse and purify the southern lands through the element of fire before its departure is well and truly noticed.

Traditionally the Sabbat celebrated is that of the first harvest, Lughnasadh (from the Irish Gaelic Lúnasa) or Lammas (from the Anglo-Saxon hlaf-mas, “loaf-mass”) and when “the feast of the first fruits” was observed.  In the agricultural year, Lughnasadh or Lammas also marked the end of the hay making season that had commenced as early as mid Summer. 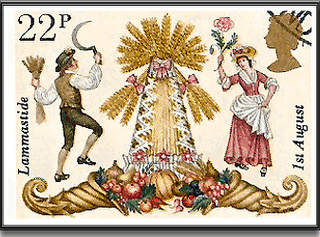 According to Irish mythology, the festival of Lughnasadh were first observed by the God Lugh as a funeral feast and games in honour of his foster mother Tailtiu who had died from exhaustion after clearing the plains of Ireland for agriculture.  Originally known as Óenach Tailten, these games were held at Tailtin in what is now County Meath and were considered to be similar to the ancient Greek Olympic Games in that they included ritual athletic and sporting contests. The Óenach Tailten also included fairs, the drawing-up of contracts, and matchmaking.  Trial marriages were also were conducted, where young couples joined hands through a hole in a wooden door.  These marriages lasted a year and a day, at which time the union could be made permanent or broken without consequences.  When the games were revived in the 20th century, they were known as the Tailteann Games.

Here in central southern Australia, the hay and grain harvest has long been collect, and with the intensive weather at the start of the year (that brought an early and rather frightening start to the bush fire season), there is limited bounty to reap from my garden as corn, tomatoes, lettuce and celery all perished.  Yet, being a festival which can also be seen as a Wake for the Sacred King (the Lord of the Grain), this appears rather appropriate. 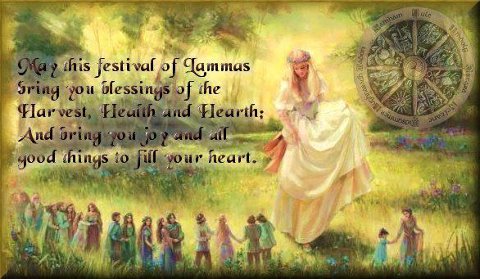 A Wake (from the Old English wacan meaning to “wake up” or wacian “to be awake, keep watch”, was a custom in most Celtic countries in Europe for mourners to keep watch or vigil over their dead until they were buried.  At Lughnasadh, we prepare ourselves to observe the Wake of the Sacred King whose life has been sacrificed in order for ours to be strengthened.  And while the sun continues to entice us outdoors, we are reminded of the more festive aspect of this time of the year – the fairs, handfastings and feasts, as are expressed in the following poem, “The Rigs O’ Barley” by Scottish poet Robbie Burns: 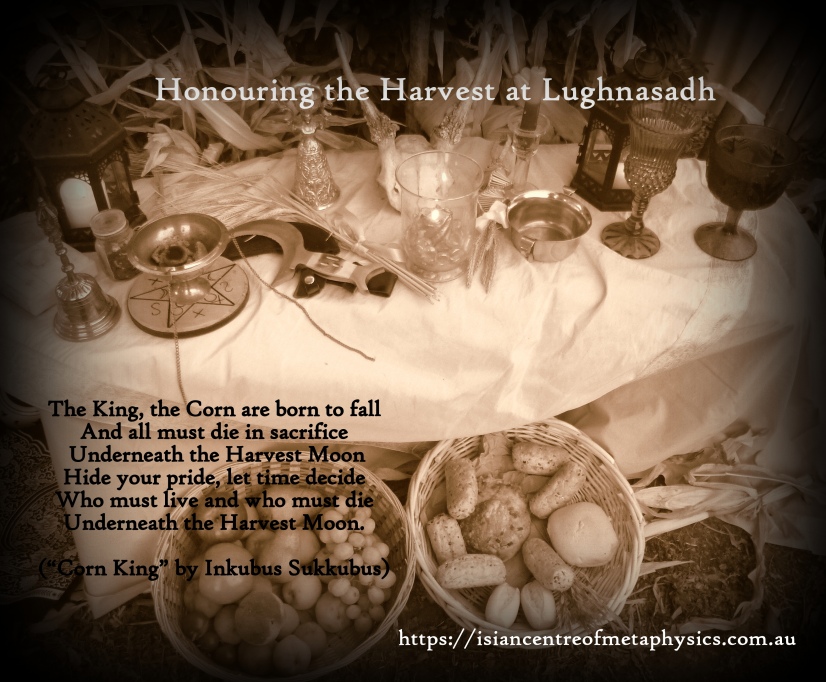 It was on a Lammas night, when corn rigs are bonie,
Beneath the moon’s unclouded light, I held away to Annie:
The time flew by, wi tentless heed, till ‘tween the late and early;
Wi’ sma’ persuasion she agreed to see me thro’ the barley.The sky was blue, the wind was still, the moon was shining clearly;
I set her down, wi’ right good will, amang the rigs o’ barley
I ken’t her heart was a’ my ain; I lov’d her most sincerely;
I kissed her owre and owre again, among the rig o’ barley. I locked her in my fond embrace; her heart was beating rarely:
My blessings on that happy place, amang the rigs o’ barley.
But by the moon and stars so bright, that shone that hour so clearly!
She ay shall bless that happy night, amang the rigs o’ barley.

I hae been blythe wi’ Comrades dear; I hae been merry drinking;
I hae been joyfu’ gath’rin gear; I hae been happy thinking:
But a’ the pleasures e’er I saw, tho three times doubl’d fairley
That happy night was worth then a’ among the rig’s o’ barley.

:: Monday Night Meditation and Mantra Open Circle: Physical meditations are being held with limited numbers only as we continue to observe social distancing. (7.30pm to 8.45pm). Suitable for beginners.
See “Meditation Circles” for more information.