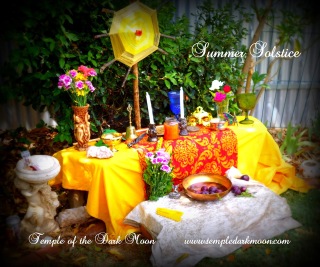 As the seasonal wheel turns and with the sun entering the astrological sign of Capricorn, today marks the time the Summer Solstice here in Adelaide, the longest day.  In fact, at 9:14pm this evening we would have experienced some four hours and 42 more minutes than at the Winter Solstice in June.

Within various Pagan traditions, the divine masculine, the God, is perceived in his guise as the Sun, the Solar God, who is now at the height of his power, and increasingly, he makes us aware of his strength.  This show however comes at a cost.  While it will be some time before we actually notice, from the Summer Solstice onwards, the power of the Sun God slowly begins to wane.  This darkness, however, is not perceived in a negative sense, because it is needed to ensure the fertility of the land.  Still, in doing so, the Sun God sows the seeds of his own death.

The Goddess, the divine feminine, in her aspect as Mother Gaia, shares with us her magnificent bounty.  All around us the world is alive with activity as the flowers are in full bloom, bees buzz about the garden collecting pollen for the production of honey, and the air is filled with nature’s own choir.  Amongst all this life and bounty, there is another aspect that is often overlooked – that being “death in life”.

While we humans tend to fear the process death, in the world around us, it is merely a transitional phase. Within the bountiful produce are the seeds that will sustain life, feeding us throughout the colder months as well as being available for planting in the Spring to repeat the cycle. After the pollination and fertilization of the beautiful flowers we so admire, they will die. But this is the natural cycle of things, of life. In their death, the flowers release their previous seeds that fall to earth in order to create new life. It can be difficult to connect to the fact that the time of waxing is coming to an end and the waning time is almost upon us when we are surrounded by so much bounty and life seems to be at its fullest.

Summer is a time of beauty and love, energy and strength, and rejoicing in the warmth of the sun. Daylight saving time encourages us to spend longer hours outdoors, often socialising with family and friends. As we enjoy this carefree time, celebrating life and the triumph of light, we do not want to think about the rest of the cycle, that of death, as we will be reminded of that only too readily when the temperatures continue to climb skyward.

:: A Day with Hekate: Saturday, 13 August 2020. Spend the day exploring this powerful goddess who associated with the crossroads, the Underworld, the moon and witches. Held at the Riverdell Spiritual Centre. See “Special Events” for more information.

:: Encountering the Dark Goddess mini retreat: Saturday, 12 September 2020 A full day retreat journeying into the Underworld to connect with the darker aspect of the Divine Feminine for healing the Shadow and initiation into your authentic self.  See “Workshops & Events” for more information.